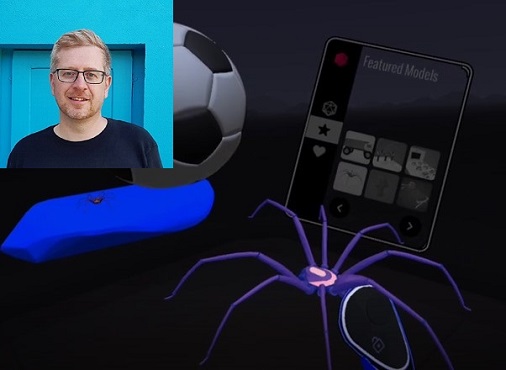 1) The first principle is based in particular on analogy and metaphors. They are frequently used in hypnosis. The therapist suggests metaphors with therapeutic effects. VR not only works on this effect on the cognitive level (focusing the attention) but also on the body level. The metaphor is said to be enactive (cf. Varela’s work on embodied cognition). Hypnotic trance, intuition and creativity are based on an “unconscious” sensory experience, not just cognitive and conscious. In complementarity with the VRET the VRHT centers on sensory and bodily intelligence (enaction rather than cognitive-behavioral).

2) The second principle is based on the transposition of the real problem (in-vivo) into a virtual solution (in-virtuo). Once the sensory resource has been experienced in-virtuo, the therapist invites his patient to “trance” his bodily perceptions. This work of suggestion is carried out especially when the patient is experiencing a hypnotic state. In this case, the metaphor indirectly suggests useful messages that activate, amplify and anchor the resource in the reality of its daily life. In complementarity with VRET, VRHT focuses on the creative use of the problem (not necessarily the exposure).

3) The third principle is that of patient-therapist co-creation. The state of hypnosis is based on the creativity of the patient and in particular uses inducers of autohypnotic trance (images, drawings, audios, videos provided by the patient). It is about using these mediation supports to stage them in a VR environment. Beyond the supports, it is a process of transmediation. For example, a patient’s drawing can be integrated as a texture of a 3d object in the Tilt brush sofware. This object can be recaptured as an image then printed or even sent by email to the patient. The creative loops between reality and virtuality are endless! These different mediations serve to activate, amplify and anchor the patient’s self-hypnotic creative trance. In addition to the VRET, the VRHT is a therapeutic co-creation process by the patient and the therapist (different from a protocol dispensed by the therapist).

What does this process consist of? this is a process of co-constructing a hypnotherapeutic VR metaphor in five steps:

Case: Session1. Jules, 10, describes the problem with his words: “I’m afraid of spiders (…) I’m sick of it because it prevents me from sleeping (…) I also check all the time before enter my room ”. Jules wishes to learn to overcome this fear of spiders, to regain self-confidence and a quality of sleep. He would like to regain a feeling of courage and security. For him he will know that therapy is useful when he can “fall asleep peacefully”.

Case: continuation of session 1. Beyond the problem, Jules evokes his passion for soccer (hypnotic resource). We explore the positive and self-hypnotic sensations that help Jules regain a sense of confidence and security. The therapeutic alliance is amplified with Jules when we suggest that he use the VR headset. On his smartphone, he shows us a photo of his favorite soccer player (Lionel Messi is already hypnotizing him!). On the therapist’s side, we upload an image of Lionel Messi and we integrate it into the media library of the Tilt Brush software of the oculus Quest headset connected via a usb cable to a pc (transfer from the pc to the media library of the Tilt Brush software on the Quest ). 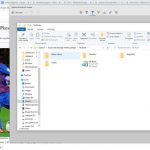 3) A step to prepare for the VR experience

Case: session 2. We resume the thread of the first session. We show Jules the image of Messi imported into the VR headset. We suggest that Jules observe what he feels when he looks at this image. We suggest that he feels the strength and courage of Lionel Messi. We then suggest to Jules to test and learn the Tilt Brush interface. Jules explores and has fun writing the name of Lionel Messi in particular. We also show him the 3D object library that he can import (the library can be accessed directly in Tilt Brush). We suggest that he find and import the 3D objects useful for him (a soccer ball and a spider). Jules hesitates when choosing the spider but is reassured because the graphics of the Google Poly library “is a bit like pixelated lego (…) I am willing to take the spider as a lego (…) it is less impressive but it still makes me weird when I enlarge it ”. 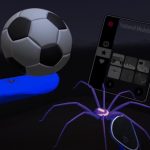 4) A step to live the VR experience

Case: Continuation of session 2. While allowing Jules to freely explore and experiment with the effects and tools of the Tilt Brush menu (drawing, size, eraser etc.), we suggest a double task (dissociation): “while part of you explores and draw, another part of you can observe the useful sensations that your body feels… “We encourage it to amplify the feeling of confidence in this force,” that of Lionel Messi “as Jules says. The feeling of courage takes hold in the body. Jules gains confidence and has fun moving the 3d spider around the VR scene. He plays at changing the size and distance. He especially enjoys pretending he is crushing it with the ball. The “as if” fades, the immersion and the feeling of presence are amplified. Jules fully lives the sensory and narrative experience through this transmediation. Jules’s body implicitly constructs a different perception of the spider. The therapist positively reinforces the choices and ideas of his young patient. It reinforces the feeling of control. Jules stays a little longer in a hypnotic trance (his eyes open) on the effects of hypnotic particles: “it blows my mind!” adds Jules. 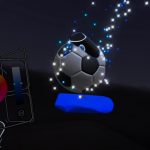 5) A step to activate, amplify and anchor the patient’s self-hypnosis

Case: Session 3. 15 days later, in this session we offer Jules to share his memory of our exchange and VR experiences with us. We thus reactivate, through sensory memory, the hypnotic trance. We invite him to find this feeling of security on his own: “How do you manage now to find this feeling of Messi … of confidence in your body?”. Jules spontaneously closes his eyes. He swallows and notably remembers that beautiful pixelated particle effect, the picture of Messi he imagined shooting into a virtually real spider. We suggest Jules to get deeper into self-hypnosis (as if we were in the VR scene). Jules especially feels this strength in his shoulders and forearms. He also feels the strike force of Lionel Messi at the level of the feet. He relives the memory of the 3d scene in classical hypnosis and enriches it in particular with feelings of motion. The VR experience of the second session is enhanced and enriched by the self-hypnosis work of this third session. Jules finds that his mind has a natural power of virtualization, self-hypnosis. Jules leaves again and we offer him to test his own new idea: “if I meet a spider, I would have to think of the pixelated lego spider and Messi (…) to fall asleep I will think of the effect of lightness of particles which soothe (…) like pixels which fly lightly towards the sky ”. We suggest to go further in therapy. Jules agrees to continue and test a new VR experience where we can integrate a video of a spider into his Tilt Brush scene. Jules specifies that he wants to position it in small size under Messi’s foot. We congratulate him on this wonderful idea. 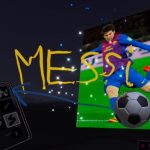 This transmediation process will continue in the following session. VRHT helps Jules to weave and enrich his own hypnotic and therapeutic trance during the sessions… to learn to weave his body safety net, a bit in fact like the spider would beautifully do;)