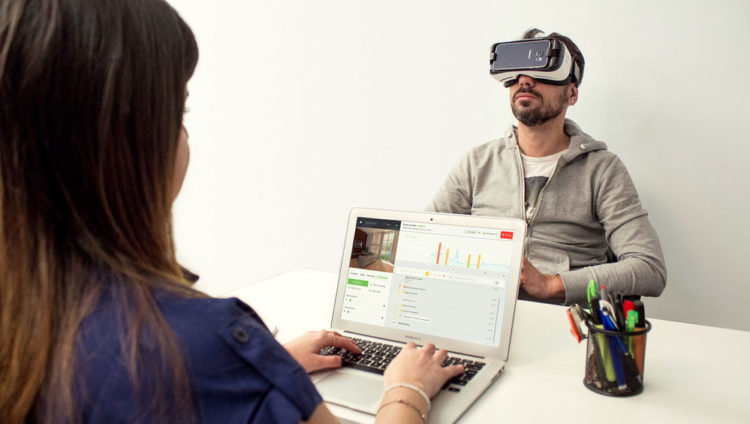 VR for curing phobias: a gadget or a real asset ?

If one takes a closer look at the treatment of phobias with virtual reality (VR), one is immediately struck by a paradox. There is a fairly exhaustive scientific literature on the subject which, over the course of the tests, shows that the therapy of exposure of patients by virtual reality works as well as exposure in vivo (2) with of course advantages for VR that avoids the time, expense and logistics associated with in vivo exposure. Suppliers of solutions combining hardware and software (C2care in France, OxfordVR in the United Kingdom, Psious in Spain, Invirtuo in Canada) have taken up the subject over the past five years and are growing rapidly, judging by their growing number of employees visible on Linkedin and their successive fundraising (€ 12M in February 2020 for OxfordVR). Yet one of our first interviews with a pioneering psychologist in France on the subject tells us that she stopped not convinced at all by the interest of the device for her practice. There are other tools / methods, she tells us, it’s a bit of a “gimmick”. A gadget which in fact is only used by around 1.3% of psychologists in France, a still very low proportion, and which remains so even if we compare the number of users to the lower figure of psychologists practicing CBT in France, and therefore for whom this technology is useful. Are we still facing a pseudo-disruption in this area that will flop like 3D TVs or a use case that a few opinion leaders and determined manufacturers will finally manage to bring to mainstream? A difficulty in going from the “lab” to the “practice”and thus move from “evidence-based practice” to “practice-based evidence”? One has to establish the facts independently of marketing discourse, take an inventory, compare … Here is what we learned from around thirty interviews  conducted in France with psychologists, psychiatrists, hypnotherapists:

A count of the number of practitioners using virtual reality for phobias and visible on the internet shows that we are talking about a few hundred therapists in France. We asked about 60 of them for an interview. Of these, 26 agreed, 10 responded that they had stopped or used VR too occasionally to be legitimate on the subject. Among those interviewed, we realize that the “must-have” test (3) in which the person gives a score between zero (“the solution is completely useless and I would do without very easily”) and ten (“the solution is essential, if it were to no longer exist I could not work without it ”), provides not very encouraging results. Among users, the average rating is 3.2 / 10. “VR is not essential”, “we worked well without”, “what is characteristic of CBT is to know how to combine methods in a flexible and adapted way” … We are certainly not in front of a disruption essential to our daily lives as is the Smartphone for example. Even for avid fans, most would stop tomorrow if they had to. So does this mean that, as our first interviewee stated, we are in the presence of a “gadget”? A question on the “Net Promoter Score” (NPS) further clarifies the situation. Would the interviewees recommend that their colleagues use VR for the treatment of phobias? The calculated NPS is -11 and confirms the low satisfaction for this solution (4).

Technically first. It is “Difficult to start”, even if you get used to it in the long run, there are always updates which you have to anticipate by making them in the morning for example, and in any case sufficiently in advance not to lose credibility in the presence of the patient. Battery consumption and charging time, the presence of a cable on some headsets are also hindering a smooth usage. Certainly, the manufacturers are very attentive (a special note to C2Care!), The technology has improved significantly over the years but we are talking about solutions that are a little tricky for use in a cabinet without staff dedicated to technical subjects. Training is therefore a challenge: pioneers like Virginie Maurice-Ernoult are now very positive on the subject of VR, but her satisfaction has only come at the cost of substantial efforts and not without having “delt with teething problems”. If training is now offered, it also requires taking the time to follow it: we are far from “plug-and-play” solutions, the handling of which would involve just a tutorial on Youtube. It is even more the case when you are unfamiliar with technology. In addition, the content also shows limits: the generic subway provided in the portfolio of experiences is not a given city’s subway. Driving in a city does not provide the same experience as traveling in the mountains, yet the content do not have such variety. The 3d characters are also unrealistic: we are far from Assassin Creed or other mainstream games (and for good reasons: an Assassin Creed character can represent a development budget of several hundred thousand euros, far from what the market would be able to pay )

The actual use also hinders the development of these solutions. On average, practitioners use these devices relatively infrequently: 2 to 3 times per week. A low usage means that the rental budget is often called into question: how to pay more than a thousand euros/dollars per year, sometimes with the additional cost of a “gamer” PC, when you have one or two patients per months that are treated in VR?

At first glance, one might therefore think that it will take a few more years before the price / simplicity / result ratio allows a real democratization of this kind of solutions. Admittedly, highlighting on a practician’s site that one treats with virtual reality brings patients, but the price of annual subscriptions means that the extra business may not be worth it. The right solution would then be to turn to entry-level VR as practiced by some (For instance Emeric Languérand and Herve Montes) who have chosen the approach of low-cost headsets (integrating a smartphone instead full PC) and free content found on the internet or https://vr-well.com/

However, and as often, the averages hide gaps that are key in understanding a topic. Among the people interviewed, seven of them give a score greater than or equal to 9 and therefore are “promoters” to “very promoters” of the approach. Among the great successes and the great promoters, one counts for example Sylvie le Moullec, psychologist in Brittany and in Paris. Seeing that VR has been bringing it both tangible time and logistics savings in Quimper since 2013, she has gradually deployed systems in 3 other cities. VR has therefore been one of the key elements in the development of her activity and the VR solutions she uses, resulting from custom or off-the-shelf developments, give her complete satisfaction.

But then how to explain such differences in the satisfaction of practitioners towards this tool? Several factors could come into play. The type of phobias treated: if acrophobia is very well treated in just a few virtual reality sessions, the verdict is more mixed for example on social phobias. If the type of phobia influences the success, one of the keys could then be the profile of the psychologist’s patient base: does he/she treat more young people, is he/she in rural or urban areas, what is his/her specialty, and depending on, he/she will be questioned about phobias treated more or less effectively by virtual reality… The success of the practitioner and therefore the size of his/her patient base is also a factor: if he/She has few patients, it is likely that the solution will be of little use to him/her and that he/she will be inclined to stop the experiment in view of its high cost. The technique used is another key factor: VR is used as part of exposure therapy, and the techniques used in this context are multiple. Some may have more impact than others when combined with VR (topic of a future article!) and the practitioner may question the tool while it is the technique as a whole that should be optimized. Let us not forget to mention the factors which come into play in a general way in the success of a therapy: motivation, therapeutic alliance, patient expectation … (5) Finally, another factor could be the persuasion shown by the practitioner during the session: if some patients complain about realism, the practitioners who convince their patients that “it works” that the key is not realism but the overall experience, the interactivity, that one has to project oneself and persevere, are apparently more successful than others. Long experience and the results of exposures with more basic devices (images, films seen on a simple screen, etc.) show that the difference between the exact situation in which the patient behaves phobic and the image viewed is not all the time a critical factor for success or failure. Some even argue that the generic, unrealistic side of some VR content makes it possible to treat the phobia more generally, rather than ending up treating the phobia only in the case shown y a specific VR content. The “persuasion” factor also comes into play in the simple fact of offering this therapy regularly or not. A chicken and egg problem: if one often focuses on VR, one is familiar with the solution and therefore more effective, if one leaves it aside, the next session may present technical difficulties which will make the experience less convincing …

Is VR an essential element in the treatment of phobias? As is often the case in technology, it is probably just a question of timing. Apple’s “Newton” came too soon compared to the iPhone, mobile streaming only became a satisfying experience with 4G. As a practitioner, if you want to differentiate yourself, show that you are on the lookout for new ways to treat your patient, this investment will be useful to you. That said, nothing prevents you from waiting a little, the price / value mix will still evolve a lot (as shown by the price drop of the new Oculus Quest2 headset) and you will perhaps be more at ease with what the market will offer in a year or two. One thing is certain: you will probably be a virtual reality user. Today or tomorrow, for the first time or for a reboot in the field!

(4) An NPS calculated from the scores collected can range from -100 to +100: for innovative solutions, the standard is rather 30 and goes up to to 80 for Netflix and other “love brands”

(5) See also Thierry Melchior in “Creating the real” on the importance of suggestion, voluntary or not, by the therapist in healing, regardless of the method used.